Amazing The beauty of the Rainbow Garden Night Surabaya|Jurnalis Jombang

Surabaya is the second major city after Jakarta. The town is very hot because there is no natural cooling, all land in Surabaya nearly 80% has been used as factories and offices, as well as a mall or shopping place today. But who would have shared the mayor of Surabaya Tri Rismaharini Surabaya transformed into a city that has many parks or open space for residents of Surabaya, not just to a place of recreation for residents of Surabaya, but the park - the park also serves as an air filter of pollution caused by factories - factories or smoke in motor vehicles.

One of the most famous parks in Surabaya is Bungkul Park located on Jalan Darmo. Not only that Surabaya also has other parks namely Taman Pelangi. A park opposite the Bulog office across the road A. Yani has a unique design memeiliki 31 pillars that will emit light shades of the rainbow at night. It was amazing pillars that resemble curved sections of leaves and pour water on each end. 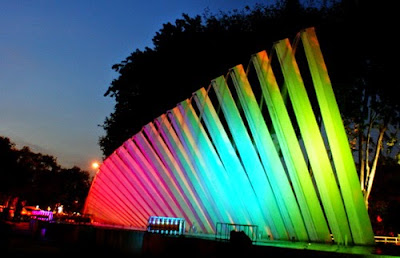 Rainbow garden layout is very strategic because it can be visited from many directions with different means of transportation, public or private kendaaran. All public vehicles heading through the park rainbow Bungurasih definitely ini.Dengan construction of parks and places - open spaces in Surabaya is certainly aimed at reducing air pollution in the city of Surabaya. Green parks like Taman Pelangi is also intended as a cheap brekreasi park for the citizens of Surabaya.

Not only is there a rainbow garden that is in Surabaya, but there are several other parks are no less good is dear also to be missed if you come to this great city. Among them there is a park in the street Ketabang achievement, Barunawati parks, gardens expression, flora gardens and nurseries in Bratang, Wonorejo tanaman garden, garden Pekalongan, Krembangan parks, gardens firefly - firefly, and much more. The mayor of Surabaya has been trying to provide a counterweight tools and air pollution Surabaya as hydrologic function in terms of water absorption and reduce flooding, another function of the garden is a garden provides beauty around the city. Surabaya city looks so beautiful and fresh.

Therefore functions - functions above, let us all together - both trying to preserve the park - the park so that our grandchildren can still be enjoyed.

Up here the article about the beauty Taman Pelangi, which is certainly capable of making you want to visit Taman Pelangi Surabaya. Make review your vacation reference above into this year.