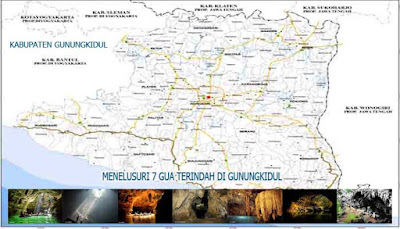 A deevaTravel - Gu n ungkidul is one of the districts that are in w territory Yogyakarta, Indonesia. The area is mostly hilly and mountainous territory in the form of limestone is also famous for the territory of its barren and droughts in the dry season.

But besides having the hills and limestone mountains, Mount Kidul also keeps a history of unique peculiarities and potential of tourism, cultural and culinary is amazing. One of them is this area there are many hidden caves are very beautiful and amazing. As Pindul which there are underground rivers and water or you will be made ​​amazed to see paintings of nature in the G ua Jomblang known as " the kingdom of God" or the Gua Braholo where the discovery of 10 ancient human fossils by archaeologists.

The following 7 Caves Most Beautiful In Gunung mandatory telesuri ubtuk you unite yourself with nature. 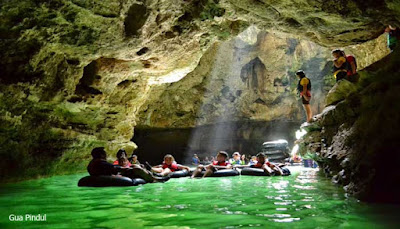 Pindul along the 350 meter long by 5 meters wide is situated in the village of Bejiharjo, District Karangmojo, Gunung k Eid, Yogyakarta. Cave in which there are underground rivers that originate from springs Gedong Seven has stunning natural views. Caves with views of the rock formations stalaktif which is a kind of secondary mineral that hangs from the ceiling of limestone caves and some of them grow up to make it as a pillar riverbed.

In Pindul you can enjoy the natural scenery is very beautiful to scour the river in the cave by using the tube. In this cave there are some beautiful ornaments such as rock crystal, moonmilk , as well as stalactites and stalagmites are beautiful. A gigantic pillars formed from the meeting of stalactites and stalagmites that age reached thousands of years lie ahead. In some parts of the roof of the cave there is also a natural paintings created by cave-dwelling bats. In the middle of the cave there is a place that resembles a large pool and is usually used as a place to rest for a moment so you can swim or jump from a height. 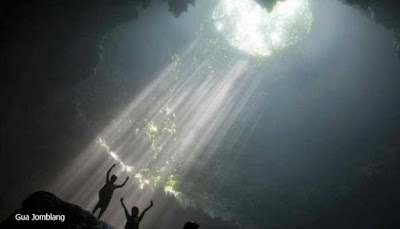 Goa Jomblang is a vertical cave that type of collapse doline. Goa was formed by geological processes amblesnya land and vegetation on it into the earth that happened thousands of years ago. This debris formed a sinkhole or pitting that in the Java language known as luweng . That makes it unique because in the cave there is broad mouth of the cave is about 50 meters is often called Luweng Jomblang. Goa Jomblang in Gunung Kidul Regency, Yogyakarta.

To enter Goa Jomblang height of 60 meters is required capability single rope technique or [single rope technique] (SRT). And anyone who wishes caving in Gua Jomblang required to use special equipment in accordance with safety standards in vertical cave caving and cave must be accompanied by searchers who are already experienced. This time Jomblang Cave is where the conservation of ancient plants and developed into a prominent tourist spot by nature lovers, especially in Indonesia, namely Cahyo Alkantana.

Sunlight bursts in from Luweng Grubug as high as 90 meters form the pillar of light, illuminating the beautiful flowstone cave and the depth of darkness. Water dripping from a height helped beautify the scenery. And if you come to this place, you will surely be amazed when they saw the terkagun-natural painting known as the "light of heaven". 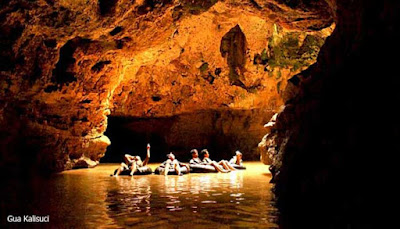 Explore underground caves became one of the potential offered in the Cave Kalisuci. The cave is located in the village Pacarejo, Semanu, Gunung k eid, Yogyakarta has a very unique landscape. Uniqueness is encountered the phenomenon of formation of the landscape, karst surface be formed depression collapse that form caves vertical and formation of positive form of hill karst cone-shaped, while below the surface in the form of underground river that flows through the caves horizontal which is a system underground river of interconnected one-another in the karst region of Gunung.

In this area you can do caving activity by using special equipment such as inflatable boats, ropes, and others. You can also enjoy the beauty of Kalisuci cave with stalactites and stalagmites, beauty and coolness that blends adventure and full of challenges. 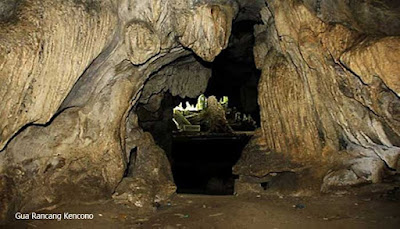 Based on the book "Mosaic Pusaka Budaya Yogyakarta" compiled by the Institute for Preservation of Archaeological Heritage of Yogyakarta , Cave Design Kencono an ancient cave parallel with Caves Braholo contained in District Rongkop, it is based on the discovery of artifacts and bones are estimated to live in thousands of years ago , The cave, which has a spacious and airy room with Klumpit tree (Terminalia edulis) is estimated to have more than two centuries old and was once used as a hideout and meeting Laskar Mataram when putting together a plan to expel the Dutch from the Sultanate Ngayogyakarta. Because it is used to design strategies for the noble purpose of this cave called Gua Design Kencono.

In addition to a cavern in the narrow and dark, on the other hand there is also a hall that supposedly connects Cave Design Kencono with Niagara Sri Gethuk . Upon entering the hallway you have to walk squatting even occasionally crawl because the ceiling is very short. According to the manager, some of the hall has collapsed so it can not be traced. As evening approached, Cave Design Kencono faint moonlight illuminated the mystical and exotic looks. Dim starlight and garden lights are not too bright become loyal friends chatting over a cup of ginger. Derik insects combined with the rustle of the wind creates a natural symphony melodious and accompanying chat late into the night. 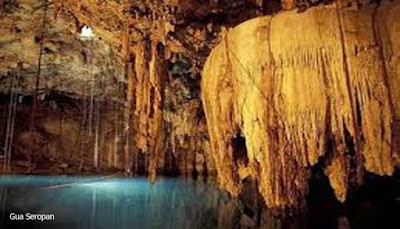 Seropan cave is located in the village of Semuluh, Semanu, Gunung Kidul and is approximately 45 km from the east of the city of Yogyakarta. The caves were classified as large cave with a length of 888 meters and a depth of about 63 meters into a very suitable place for you who like adventure and want to explore the bowels of the earth while to scour the halls of the cave with the uniqueness and nature paintings imprinted on the cave walls.

Attractions of Goa S eropan pecita very closely related to the nature and extreme sports. Here you can do the activities of the traverse cave or often referred to also caving or rock climbing or rock climbing. Besides the terrain is very suitable to pass two of these activities, also supported by the natural landscape of the cave in the form of stalactites and stalagmites that will add zest to climb the cliffs around the cave. 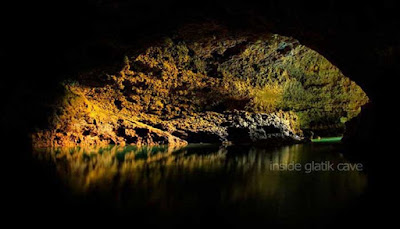 Wren Caves are natural attractions such as caves, located in the Village area Bejiharjo, Karangmojo Gunung Kidul, DI Yogyakarta is located quite close to Pindul. The beauty of this cave complement the tourist village Bejiharjo.

Cave with a length of 300 meters, however towards the deepest part of the cave was a struggle, because in some parts of the cave, visitors must crawl and creep. In some parts of the cave, there are stalactites and stalagmites are very close together and nearly met. The stalactites and stalagmites in the cave is very beautiful. On the inside of a cave inhabited by many bats. The bats hanging from the roof of the cave. The bat cave penyelusuran add to the challenge in this, because when a visitor enters in the area, the bats began to fly. 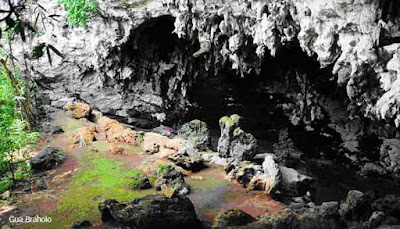 Braholo cave is one of the ancient caves, located in District Karangmojo, Gunung Kidul, Yogyakarta. In this cave ever discovered 10 ancient human fossils in conditions that are relatively intact.

Besides about early humans, Cave Braholo Attraction is cool to do caving (caving). By caving, you will find the greatness of God who has created the beauty of the 'world' underground. In addition there are stalactites and stalagmites in the cave there are underground river which is very clear.

Well that's 7 Most Beautiful Caves in Gunung se like reference you who want to m enelusur i cave -gua beautiful and stunning in the region Gunung Kidul Regency .