Prawirotaman, Kampung Batik Switch to Kampung Turis.Prawirotaman is a village that has been known since the 19th century. At the beginning of the current pre-independence era, this village Became a concentration camp of fighters. Post-independence precisely 60s, this village Became known as a center of printed batik industry the which is managed by The Descendants Prawirotomo (aristocratic palace who received the prize piece of land from the palace). And since the 70s, the offspring Prawirotomo Began to switch to specialty services, and over time Prawirotaman known as a tourist village. 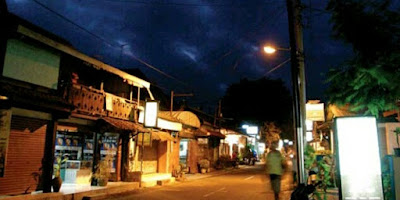 A series of Inns in the area Prawirataman very unique design of the building, ranging from the classic to the Java hotel today. Obviously, the price Provided IS ALSO very fantastic, ranging from Rp 50,000, - to Rp 300,000, -, with cheap price, the hotel Provided already have adequate facilities. Because of the inaccessibility price, Prawirotaman commonly used as an alternative site when looking for a venue.

Region there is the most famous area of ??Prawirotaman I or commonly called the Prawirotaman alone. In addition to lodging, the region's other facilities are Also available such as the travel tour agents, internet cafes and kiosks, bookshop, cafe and restaurant. Some artshop Also there, artshop was selling a variety of trinkets art, ranging from meka, to antiques. One of the antiquities that sold well Among tourists is batik.