A deevaTravel - Know the Desa Adat be the right place to get to know the culture and life of local people. With houses that are still structured along traditional clothing to items used in everyday life.

For those of you who want to Know the Village People In Indonesia , Interact directly with the community to find out the Village People live their life like in Desa Adat Kampung Naga , Tasikmalaya, Kampung Tarung in Sumba Barat or Rural Terunyan in Bali.

Here Desa Adat In Indonesia you need sambangi to know more about their lives up close. 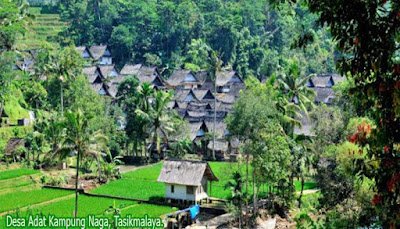 Kampung Naga is a village inhabited by a class of people who are very strong in holding the relics of ancestral customs, in this case is the traditional Sundanese. Like the Bedouin settlements, Kampung Naga became the object of anthropological study of the life of rural communities in the transition from the Sundanese Hindu influence to the influence of Islam in West Java.

Kampung Naga is a traditional village that is still preserved. Indigenous people are still holding their ancestral traditions. They rejected the intervention of outside parties if it did interfere and undermine the sustainability of the village. However, the origin of the village itself does not have a bright spot. There is no clear history, when and who the founder as well as what lies behind the formation of the village with a culture that is still strong. Naga villagers themselves call their village's history with the term "Pareum Torch". Pareum if translated into Indonesian, are dead, dark. And the torch itself mean light, light, light. If translated briefly namely, Death of illumination. This relates to the history of the village dragon himself. They do not know the origin of the village. Dragon villagers tell that this is caused by the burning of archives / history of their current hometown burning dragon by the Organization of DI / TII Kartosoewiryo. At that time, the DI / TII want to create an Islamic state in Indonesia. Kampung Naga which is currently better supported Soekarno and less sympathetic to the intentions of the organization. Therefore, DI / TII who do not get the sympathy of Kampung Naga burn down the village in 1956. 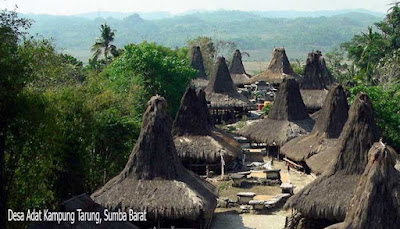 The traditional village dwelling tribe Loli is located on a hill surrounded by large rocks not far from the economic center of Waikabubak. For tribal village Loli Combat is not only a place to live, but also serves as a social and religious institutions.

The layout of the village consists of houses (uma) which extends in the middle housing megalithic graves or tombs of stone called Waruga. The location of a symbol Tat local cosmology.

Vernacular architecture that became the skyscrapers of the village Tarung is Sumba Uma or custom home with a rectangular structure, on the stage supported log stilts. Generally custom home built with a main frame pole pillar (kambaniru ludungu) as much as four stems, and 36 pillars (kambaniru) in the form of a portal structure with pen connections generally use wood mosa, delomera wood, and wood Masela. Average connection roof put on a good bond with the rafter and roofing thatch (Imperata cylindrica).

This simple structural system associated with unfamiliar woodworking tools in addition to machetes and axes for people new to metal Sumba when the Portuguese stop by there. 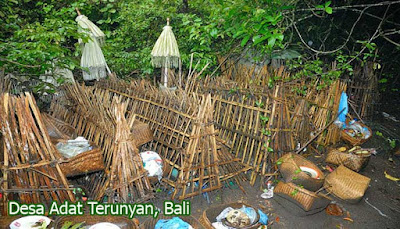 Terunyan is a village located in the district of Kintamani, Bangli regency, Bali, Indonesia. People in this village has a tradition of funerals where the bodies were buried on a large stone basin which has 7 pieces.

Desa Adat Terunyan govern the procedures for its residents bury their dead. In this village there are three cemeteries (sema) that are intended for three different types of death. When one resident Terunyan died of natural causes, his body covered with a white cloth, consecrated, then laid without buried under a big tree called Taru Menyan , at a location called Sema Wayah . However, if the cause of unnatural death, such as accidents, suicide, or murdered, his body will be placed in a location called Sema Bantas . As for burying infants and small children, or people who are already mature but unmarried, will be placed in Sema Muda (House Miarta Yasa).

An explanation of why the bodies were placed neatly in sema it does not cause odor when naturally, remains of degradation on the bodies is due Menyan Taru tree, which will be fragrant and were able to neutralize the stench of corpses. Taru means tree, being Menyan means fragrant. Menyan Taru tree, only grows in this area. Be Tarumenyan later better known as Terunyan is believed to be the origin of the name of the village. 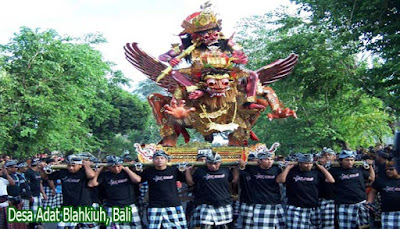 Traditional Village Blahkiuh is the capital of the District Abiansemal, Badung, Bali Province which has a famous art assets in Bali such as Kecak, Parwa, Arja Basur, Joged tube, and the art of carving. 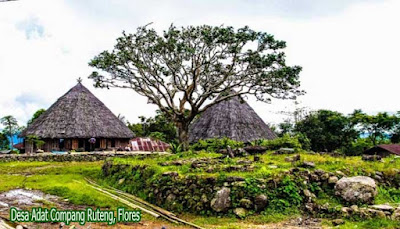 Compang Ruteng village still retains the exotic traditions. One characteristic in the village of Ruteng Compang this is still a ragged rock, the name for the stone altar that is often found in traditional custom home page of the Manggarai community. One function of this ragged stone is as a place to slaughter the sacrificial animal such as a cow or buffalo.

As a traditional village , you who come to enjoy the exoticism of one of the cultural richness of Indonesia, by directly interacting with the surrounding community. Visitors or tourists can also enter a traditional house called House Gendang and observe in detail the structure, characteristics, or traits custom homes of the Manggarai community. Visitors are greeted with traditional 'ceremony welcoming guests, and visitors must obey and follow a series of ritual process Manggarai community. 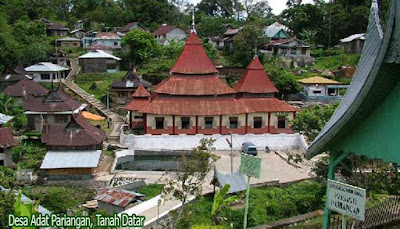 Pariangan is a country in sub Pariangan, Tanah Datar, West Sumatra Province. The country is located on the slopes of Mount Merapi at an altitude of 500-700 meters above sea level. According Instrument Pariangan is the oldest country in the realm of Minang.

In these villages, including the best in keeping the traditional house called the longhouse (Bahasa Minang, big house), so it is still encountered many well maintained. In this village is also still found surau , which is still a communal residence for unmarried men.

And in the middle of this village still stands a traditional mosque large enough that are expected already in the early nineteenth century, where in the mosque there is a public bath aqueous heat is still in use today. In Nagari there are also new cultural heritage sites Furnace Tigo Sajarangan.

In May 2012, Nagari (village) Pariangan selected as one of the five most beautiful villages of the world's Budget Travel , a magazine of international tourism. 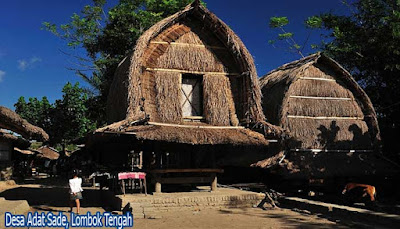 Sade is a hamlet in the village Rembitan, Pujut, Central Lombok. This village is known as a tribal hamlet maintain Sasak. Sade Sasak tribe is well known in the ears of tourists who come to Lombok. Yes, the local Tourism Office is making Sade as a tourist village. This is due to the uniqueness of the village of Sade and Sasak are so inhabitants.

As a tourist village, Sade has its own uniqueness. Arguably, Sade is a reflection of the indigenous Sasak Lombok. Well, even if electricity and programs of the National Program for Community Empowerment (PNPM) of the government is already in there, Sade village atmosphere still present original native Lombok village.

It can be seen from the building that houses seem very traditional. The roof of the fibers, horses memakaiÂ bamboo roof without spikes, walls of woven bamboo, and immediately paved ground.

Interestingly, the villagers had a peculiar habit is to wash the floor using buffalo dung. Antiquity when no stucco, the Sade Sasak slathered buffalo dung in the base of the house. Now most of us has to make cement plaster first and then we spread buffalo dung.

That said, by way of so-storey house is believed to be warmer and shunned mosquitoes. Just imagine, shit was not mixed with anything except a little water. 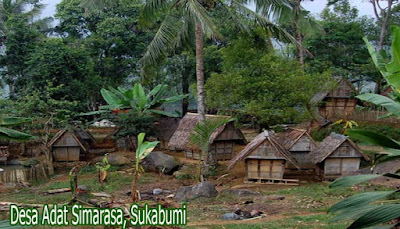 Sirnarasa is a village in the district Cikakak, Sukabumi, West Java, Indonesia. Located approximately 30 km from the city Palabuhanratu,

Sirnarasa is one of the village traditional is still holding strong with custom. The culture, including Sirnarasa into the Kasepuhan Ciptagelar, the traditional South Banten. In indigenous territories Kasepuhan this, many agricultural activities -is associated with the cultivation of di- to follow the provisions of the customs. One of the great ceremonies that attract the attention of the public, often regarded as the cultural attractions are scarce, is the Seren Taun as the embodiment of gratitude for God's gift of farmers in the form of the successful harvest. Seren Taun usually held in July-August. 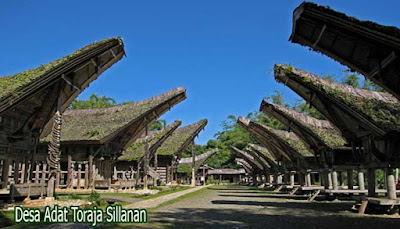 Sillanan is the name of a traditional village Toraja society. In this place there are buildings or tomb megalith menhir batuyang be related to tradition and traditional ceremonies Toraja people who are still held. From traditional ceremonies, tourists will get an overview of the functions and roles of the historic relics of the lives of local people. Several houses and barns tongkonan the very old can still be found here, while some of them have been renovated as a result of age. 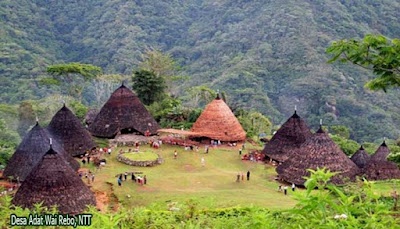 Wae Rebo is a remote and mysterious indigenous village in Manggarai regency, East Nusa Tenggara. In this village there are only 7 main house or the so-called Mbaru Niang. According to legend the people, their ancestors came from Minangkabau, Sumatra.

Many tourists and researchers who linger in Wae Rebo to find out the origin and uniqueness of the architecture that was there. Another attraction of course, a very open society, but thick customary, also panorama inexhaustible charm.

For fans of the nature or cultural tourism, Know the 10 Village People above can be used as an alternative to the best tourist destinations in Indonesia and of course there are many more villages other best customary in Indonesia that have not we present to you ..