Kete Kesu is a tourist village in Tana Toraja region known for its customs and traditional life of the community that can be found in this region. Kete Kesu means

Kete Kesu consists of pasture and rice surrounding Tana Toraja traditional house is Tongkonan. Most of the traditional house (Tongkonan) located in the village estimated to have been about 300 years old and is located opposite the small granary (reeds). 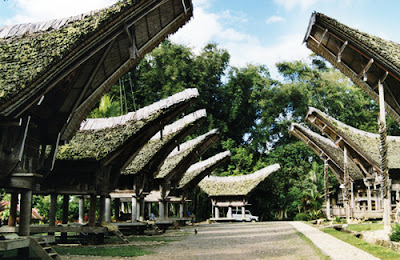 In one Tongkonan there is a museum containing a collection of objects of ancient indigenous Toraja, ranging from carving, sharp weapons, ceramics, sculpture, fabric from China, and the flag. The hallmark of Tongkonan is in the form of doors that open to the top, a black roof in the coated fibers, shaped like a boat face down. The building in this village should be built facing north because people here believe that their ancestors came from northern and when someone dies, his spirit will gather with ancestral spirits who are in the north.

Besides the museum, the village there is also a training center of the craft of making bamboo. Many people in this village that has engraving, carving and painting. Most powerful carver carving for custom homes, wall hangings, souvenirs, and tau-tau (a statue in honor of the dead were buried) which is then sold. Moreover, in Kete Kesu also there are two types of graves that holds mystical story loh! The grave is the cemetery on the hill and a graveyard of buildings. Some indigenous tombs in Kete Kesu has been closed with iron bars to prevent theft of the statue of customs bodies (tau-tau). There are also several bodies which can be seen clearly from the outside along with a treasure buried in it. Generally, traditional village coffin shaped like a boat, a buffalo and a pig with sculptures or carvings that adorn.

Tourist sites is about five kilometers from the center of Rantepao, many also visited by foreign tourists because of the atmosphere of the ancient cemetery that does not exist in the area else.If you and your family intend to visit these places, it is better if you bring lunch to eat and drink Kete Kesu itself because in very few places to eat. As for the problem overnight, you can find lodging in the city of Rantepao which is about five kilometers from Kete Kesu Kete Kesu because unlike other tourist attraction, in Kete Kesu not encountered the inn.

To get an entry ticket, you only need to spend $ Rp5000,00 for domestic travelers and Rp10000,00 for foreign tourists. Not so spend is not it? If you have finished a visit to the village of Kete Kesu this and want to have souvenirs typical, you will not be difficult for to look for it because at this location there are many stalls selling a variety of souvenirs craft a truly distinctive. Deh nyesel not reply to the village of Kete Kesu this!