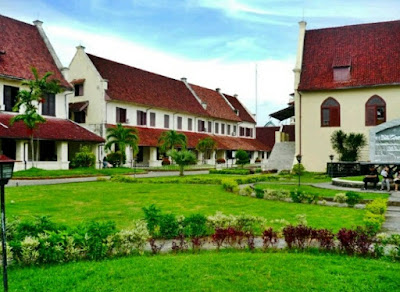 The fort is interesting because this castle is a witness to the struggle of Makassar. The fortress was built by the King of Gowa was once built for the purpose of Makassar people's bulwark against Dutch colonialism. However, once mastered the Netherlands,

This castle belonged to the Dutch and turned into a spice storage.

Fort Rotterdam is one destination that you must visit when you are in Makassar. Because there you will find new things that have never been found. Hemm, roughly what yah? Come see the finish!

Fort Fort Rotterdam has a unique shape of the building loh! Shaped like a turtle body! This fort has a symbol of the Kingdom Berjaya advance both on land and at sea, the symbol is formed because the castle is close to the sea and on land. Because of the location of the fort was also, the fort was built with the body shape of turtles.

Even more interesting, if you enter and streets in the area around the castle, you will not be in the collection cost a dime! So, you are free to take a walk or hang out and selfie with friends or family. The streets do not have to spend a lot of money is not it?

This fort would look more beautiful if you visit in the late afternoon at dusk. Because at the time of twilight, the sun went down and it will emit orange light and gorgeous. Whoa, really gives the impression of its own is not it?

Moreover, in the fort Fort Rotterdam also a museum loh! The museum was named 'Museum La Galigo'. In the Museum of La Galigo there are many relics of ancient humans, such artifacts. In contrast to the Fort Rotterdam, if you visit the Museum of La Galigo, you had to spend $ Rp5.000,00. The fees help maintain the museum. Although paid, but still cheap is not it? Inside the museum, in addition you can see a variety of human relics from ancient times, it also can increase your knowledge loh!

Above all, the road to Fort Rotterdam also not too difficult. If you want to visit this fort but did not know where it is exactly, you just go Losari only. Because the location of the fort Fort Rotterdam is not too far from Losari.

That was a little review on Fort Fort Rotterdam in Makassar. Hopefully useful yaa ..