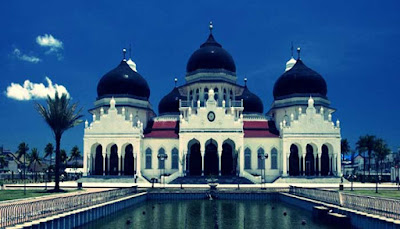 A deevaTravel - Kota Banda Aceh as the capital of the province of Nanggroe Aceh Darussalam, Indonesia used to be five world Islamic empire that many stores various heritage sites from different eras. Starting from the time of the empire, colonial, Masa joined the Unitary Republic of Indonesia, konplik period until the tsunami. Various historical tourist sites include Baiturrahman Mosque , complex passion Parks , History Museums Aceh , Tsunami Museum and various other heritage sites located in various corners of the oldest Islamic cities in Southeast Asia.

With the historical background of these diverse, capital of Nanggroe Aceh Darussalam offers History Tours are interesting to explore. Here are 7 History In Banda Aceh is mandatory for you to explore while on vacation to Banda Aceh. 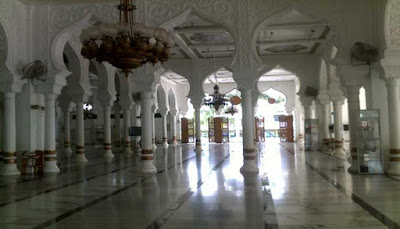 Baiturrahman Grand Mosque is the main symbol of Banda Aceh, which is located in the south of the Kreung Aceh. Mosque with a 75 meter high tower with seven domes built by Sultan Iskandar Muda Mahkota Alam in 1612 AD.

With beautiful architectural style and magnificent similar to the Taj Mahal in India have become titil the center of all activities in Aceh Darussalam. As a historical place that has high artistic value, the Baiturrahman Grand Mosque Religious Tourism into objects that can make you amazed with history and architectural beauty.

Baiturrahman Grand Mosque is also one mosque Beautiful in Indonesia which has a very beautiful architecture and stunning. By carving a very attractive, large yard, and pond water fountain style of the Ottoman Empire, you will feel the coolness of heart and soul if located inside this mosque. 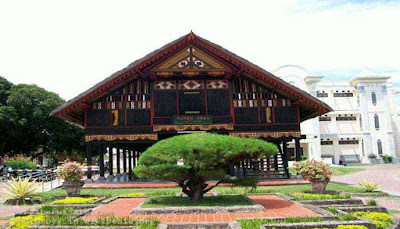 Museum of Aceh is a tourist attraction worth visiting for saving culture "into Aceh" in the past. The museum is in the form of a traditional Acehnese house (Rumoh Aceh) and has a spacious green courtyard. Located at Jalan Sultan Mahmud Shah Alaidin.

In the museum there are ancient items such as ceramics, weapons and other cultural objects such as custom clothing, jewelry, calligraphy, household items and much more.

Moreover there is also a large bell named "Chakra Donya Bell" , a bell was a gift from the Emperor of China to the Kingdom of Pasai delivered by Admiral Cheng Ho in 1414. This bell is also one proof of the triumph of the Kingdom of Aceh in the past. 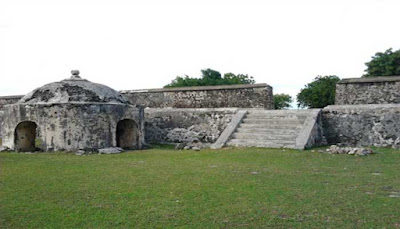 Indra Patra Fortress has become one of the historical evidence as a defense Lamuri royal society of the Portuguese attack. Located near the port of Krueng Raya directly opposite the Strait of Malacca.

The fort is rectangular in shape with a size of about 70 square meters, 4 meters high and sturdy walls with a thickness of about 2 meters. With a unique shape in which there is a small corridor shaped rocks are made of limestone concrete. The fort is an important site for the people of Aceh. There is a story of resistance, rebellion, intrigue and heroism of the people behind the history of this castle. 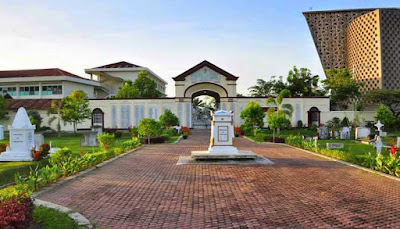 Kerkhoff is a complex of tombs of Dutch soldiers were killed in the war against the people of Aceh. The tomb complex is quite spacious is located on Jalan Teuku Umar, in addition to Blang Padang, Banda Aceh.

Kerkhoff was built in 1880 and in the complex there are approximately 2,200 Dutch soldiers are buried graves General JHR Kohler were shot dead by troops in front of Aceh Baiturrahman Grand Mosque.

In addition, visitors can also find stories about soldiers in his life told a glimpse of tombstones. The graves have as telling visitors about how the "occupants" during life. 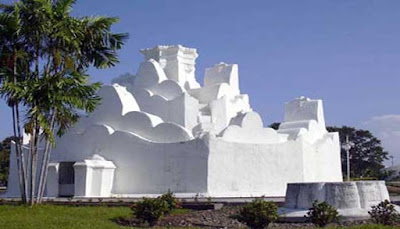 Gunongan Historical Park (daughter Pahang) or Desire Park is the park built by Sultan Iskandar Muda to his queen. The park is actually a request from the queen to the queen was not lonely when sultan perform his duty as a leader, because the sultan is very loving daughter Pahang which is none other than the queen who barasal of government pahang, then sultan also build gardens Putro phang which still stands as important icon rencong land. Inside the palace, there is a spacious garden, called the park passionate, Ataman is also a gateway domed diisebut pinto khop, the gate that connects Gunongan Historical Park with castle, Pinto Khop has a unique identity that is architectural doors a vine motif ornament and the top shaped like a crown. Even there, there Gunongan, where the queen dry hair after bathing.

But unfortunately, the icon of which is clear evidence that the sultanate diaceh is also less attractive to many people, as the people are more interested in a place that is more entertaining, not a place where you have high historical value. 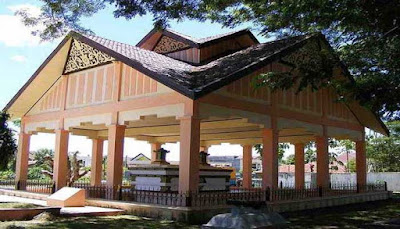 His tomb is very well maintained and clean, there is a fence that surrounds the tomb of Sultan Iskandar Muda as well as plus roof has three levels increase the effect of this tomb is very pretentious. Calligraphy carvings found along the side adds an Islamic tomb that had triumphed in his tenure.

Outside the fence tomb beside the tomb contained exactly the shade of large trees, making the atmosphere surrounding remains cool even in hot weather. Under the tree there are also turrets facing toward the front entrance to the tomb, adds to the impression of how great this Sultan Iskandar Muda in his tenure.

Not most of the tourists visiting the place aims to make pilgrimages to the memory of a great man both in the field of religion or hero in a town that has a porch julukkan this Mecca. Not only pilgrimage, of course, they also send prayers to the Sultan. 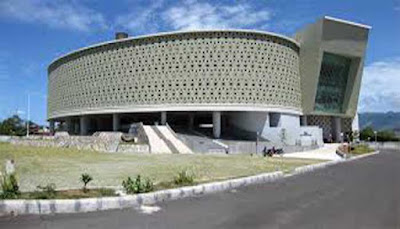 Aceh Tsunami Museum is a museum located in the city of Banda Aceh, which was designed as a symbolic monument to the earthquake and tsunami in the Indian Ocean in 2004, as well as a place Pensdidikan center and emergency shelter if the Tsunami happened back in.

Aceh Tsunami Museum was designed by the Indonesian architect Ridwan Kamil. This museum is a four-story structure with an area of ​​2,500 m² which curved walls covered with geometric reliefs. Inside, visitors enter through a dark narrow corridor and between two high walls of water - to recreate the ambiance and panic when the tsunami. The walls are decorated museum picture people dancing Saman, a symbolic meaning to the strength, discipline and religious beliefs, ethnic Acehnese. From the top, the roof forming waves of the sea. The ground floor is designed like a traditional Acehnese house on stilts who survived the tsunami.

This building commemorates the victims, whose names are listed on the wall of one of the deepest space museum and residents who survived this disaster

Well that's Seven History Banda Aceh which is worth exploring when you are on vacation to the city of Banda Aceh. Hopefully this article interesting reference to determine your next vacation.