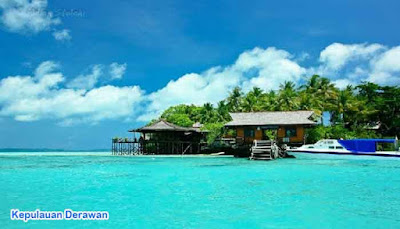 A deevaTravel - Derawan Islands are the hidden paradise located in Berau, East Kalimantan, Indonesia. In these islands are very charming nautical tourism, one of which is the Wildlife Underwater who enjoy the many local and foreign tourists.

In these islands you can enjoy some coastal ecosystems such as coral reefs , Seagrass , Mangrove (Mangrove). Moreover in these islands there are also several endangered species such as the Green Turtle , Hawksbill , whales , dolphins , Kima , quests Coconut , Duyung , Fish barracuda and some other marine species.

Aside from being the best dive sites, in Derawan Islands you can menyaksilan process of nesting turtles and also can enjoy the beauty of the beach with white sand is very clean and sparkling like crystal. 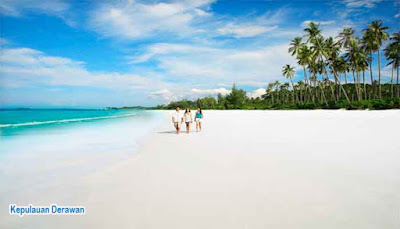 For those of you who like diving or diving, Coral Reef Derawan Islands are widespread around the island, Type coral reefs of these islands consist of fringing, barrier reefs and atolls. Coral Reef Derawan Islands has an average cover of hard corals reefs 17.41% and 27.78% live coral cover. With the number of species 460 to 470 suggests that this be a wealth of biodiversity, second only to the Raja Ampat Islands , Indonesia. 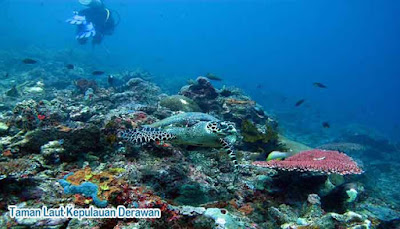 Waters around Derawan island marine park that used to travel diving to a depth of approximately 5 meters. In the park there are a wide variety of marine life that live and grow side by side, including various types of coral reefs, cuttlefish, seahorses, octopus, pipefish, ribbon eels, and fish Scorpion. Visitors can also review some of the other islands are still around Derawan which certainly has a unique natural attractions of its own, including black stingray which has a wide diameter of 6 meters, planers coconut, dolphin, green turtle, hawksbill turtles, whales, dugongs, up to the lake at the center of the sea. It was amazing sights, it's no wonder where this tour is very well known to foreign tourists even ranked third in the world as international dive destination. 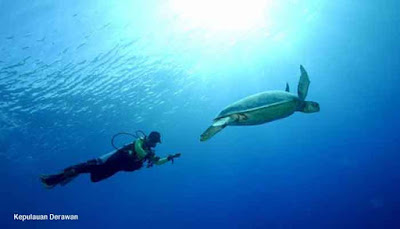 Derawan Islands also produce 832 species of fish with the dominant type Gobes (Gobiidae) , Wrasses (Labridae) , and Damselfishes (Pomacentridae) . Likewise with Seagrass, Seagrass found scattered throughout the Islands Derawan with different conditions with the average area covered less than 10% to 80%. Ecosystem is ecologically and economically very important, but its existence is threatened by human activities such as the disruption and massive forest clearing, forest fires, marine aquaculture, sedimentation, boat propellers, and others. On the island Derawan there are two dominant types of seagrass Thalasia hemprichii and Halophila ovalis and four other seagrass species are found around the islands of Halodule uninervis, Cyamodocea rotundata, Syringodium isoetifolium , and Halodule pinifolia . 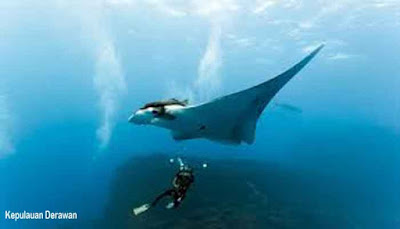 Derawan provides various facilities such as cottages, diving equipment, speedboat, and restaurants. To get to the island Derawan was quite easy, you can use the aircraft from Jakarta, Yogyakarta, Surabaya, with the aim of Balikpapan, then flew to Cape Redep for one hour by plane DAS, Deraya, or KAL Star followed by rented motorboat to the island Derawan , In addition to using air, Tanjung Redep can be reached by sea using boats from Samarinda Tarakan.