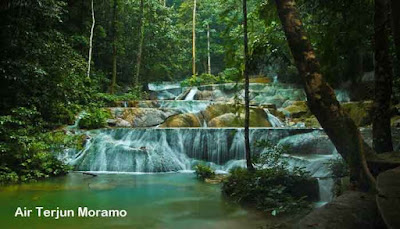 Moramo Waterfall flows past seven main stages with 60 levels of small to function as a reservoir of water (such as water pools). Of the many existing pool, there is only one pool that can be used umtuk to swim the pool is on the second level of the Seven Top Level waterfall.

According to the story that developed from the local community, Niagara bath is believed as a place of the angels who came down from Heaven. Waterfall molamo have distinctive features that are not found in places other in Indonesia. Moramo Waterfall located in areas Rock Chalk which is where water flows freely. With limestone that surrounds you do not have to be afraid to climb it because the walls were not slippery for your climbing.

In addition to enjoying the beauty of Niagara Moramo, In this place you can also discover a variety of habitats of animals such as birds, butterflies are colorful as well as other wildlife.

The beauty of Niagara Tourism Panorama Moramo with birdsong mutually bersautan and views of colorful butterflies into the appeal of the region's Niagara Moramo. 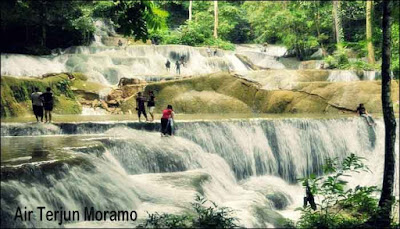 Other allure of The Waterfall Moramo is the charm of rock that form level and not slippery even if water flowed continuously for long periods of time so that you can climb to the top of the waterfall Moramo. Besides this rock provides a stunning charm when touched by sunlight. These rocks will emit a colorful glow that is dominated by the green color is so beautiful. Colorful it looks like dancing when cradled gently by the waves ripple the water when the sun touches the rocks at the bottom of the pool where the stopping of water.

Also available in the parking area, a place to change clothes, WC and a resting place to unwind.

To be able to location Moramo Waterfall, from the city of Kendari you can rent a vehicle to the Cape Nature Reserve Area Peropa located in Konsel. Vehicle rental price around Rp. 350,000. From the entrance of the Natural Reserve Area Tanjung Peropa we could walk to Niagara Moramo two kilometers. Be careful when walking to get to the waterfall because of the road conditions were slippery and uphill.