Indonesia save millions of history might not all known, either place, origin or historic stories. Below we summarize challenged historical places that tetkenal in Indonesia which may be a reference to your holiday.

Famous historical place in Indonesia in the first column is Gedung Sate. Gedung Sate stand up firmly in the heart of Bandung West Java. Became iconic of paris vanjava because of the uniqueness of the building where there are ornaments skewers on the roof of the building. Gedung Sate during the Dutch pemerinatahan named gouvernemens bedijven (GB) was established on 27 July 1920 by an architect from the Netherlands. At the time this building became the center of Bandung city administration, even the daughter of the mayor of Bandung was the one who laid the first stone in the first process of building satay at the time.

Lawang Sewu become iconic city of Semarang, Central Java. This building became one of the famous historic places in Indonesia. Established in 1904 at the height of the Netherlands. This dua-story building into a railway station at the time. For architecture, building mace sewu kidnapped Dutch ynag thick accent. Lawang Sewu has a special feature on the structure has, ie mace or countless doors and passageways that exist in every room of the building.

At the time of Japanese rule, the basement of mace sewu used as a prison. The witness atrocities recorded in narrow space invaders and stuffy. They tortured and even killed in a way that is different. Until now, evidence of Japanese atrocities was still plastered real there. For those of you who like the things menstrime not hurt to try to test the guts clicking in the basement in this sewu mace. 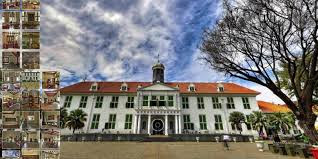 Famous historical place in Indonesia in third place is the old town tetletak in Jakarta. Voc during the colonial era, the old city known as the old Batavia. One of the destinations waisata in the old town is the Museum Fatahilah. Fatahilah Museum is one of the buildings in the old town beesejarah. High building with tiga floors that was used as a city hall. In the era fatahilan Museum is also used as a court and prison. For lovers of historic -benda objects, do not envy the collection of ancient objects found in the Museum Fatahilah yaa, because in addition to unique objects are also numerous.

A pretty capture with your camera and save them for photo documentation. In addition to the museum there are many more places in the old city that you should visit. Which will certainly bring you in the past and full of valuable lessons.

Maimun Palace became famous historical place in Indonesia in order to become an icon 3. Maimun Palace Medan North Sumatra. Built in 1888 during the reign of sultan deli. Maimun Palace to witness the history of the triumph of the king deli at the time. Maimun Palace was built on a European accent and Dutchman master peretiwi mother at the time. This 2-storey palace presents a unique architectural art again enables stunning. If you are a collector of pictures of the pretty old building, Maimun Palace pemotrtan may form the object of interest.

DO YOU KNOW HISTORY INDONESIA JAVA