Nganjuk is an area of ??East Java Province. This Nganjuk area Bojonegoro regency in the north, in the east Jombang, Kediri and Ponorogo in the south, and the districts of Madiun in the west. In ancient times, Nganjuk known as Ladang Anjuk. Nganjuk also known as the Windy City.

Nganjuk itself is an area that has a myriad of sights very beautiful such as nature and historical attractions are all in Nganjuk, if you want a vacation this is where the ideal, guaranteed you will not be disappointed, especially if you are visiting with relatives, spouse or family you will be guaranteed to be more fun holiday. 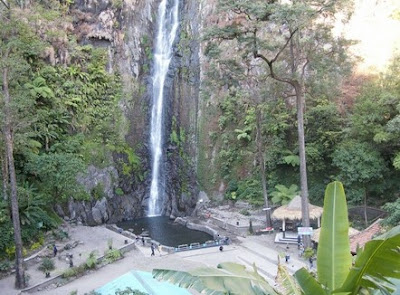 Niagara Sedudo or Grojogan Sedudo is one of the highest waterfalls in Indonesia in Nganjuk, East Java. This waterfall is located in the village area Ngliman, Sawahan subdistrict, Nganjuk. The place is located at an altitude of about 1,438 meters above sea level and has a height of 105 meter waterfall. This place besides having stunning natural beauty also has easy transport links to reach so many tourists who then chose this place as a tourist destination. Well, it is necessary for you to know that the local community still believe that the water of the Niagara Sedudo have supernatural power so that the sa'at month suro in the tourist area is much visited Nganjuk and surrounding residents to carry out the ritual bath Sedudo every year. Because they believe that the moon suro be a blessing, and when bathing in Niagara Sedudo believed to be ageless. 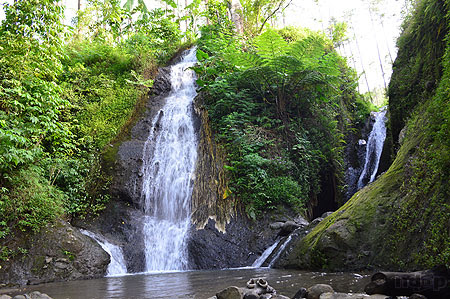 Roro Kuning Waterfall is one of the tourist attractions in Nganjuk located in the village Bajulan, District Loceret. This waterfall is different from the others because the water that falls from the top flows propagating through the rocks, that's why this waterfall waterfall called roro yellow vine. Besides enjoying the waterfall climbing, here too there is a swimming pool and captive deer. While high own waterfall is 10-15 m. Roro Kuning Waterfall stream comes from three sources that exist around Mount Wilis. The water flows by way of creeping in between the rocks padas under pine forest trees. Then the flow of the waterfall formed a trident. If you are interested to come to these places, you can take it from Nganjuk, approximately 30 km to the south Nganjuk. 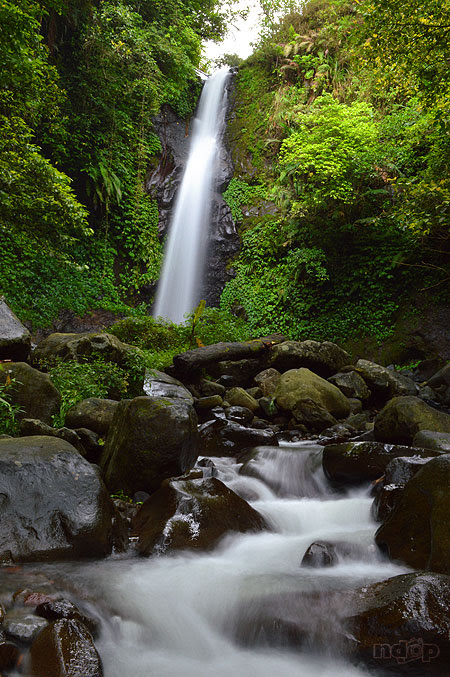 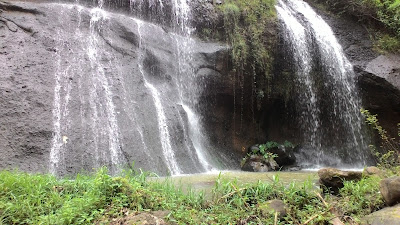 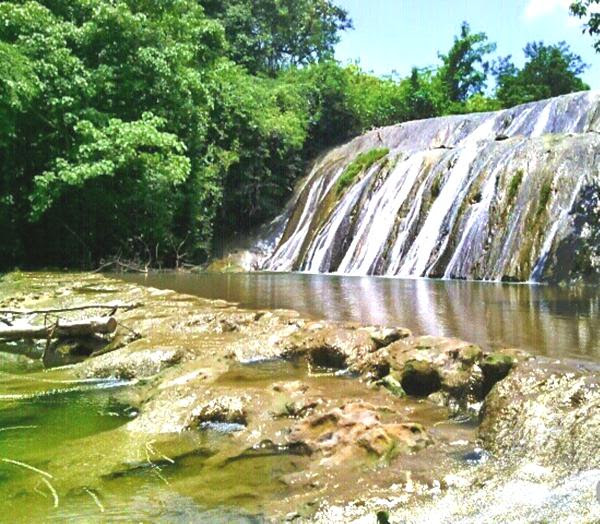 Niagara Ngebleng located on the border between jombang with a Nganjuk, precisely in Hamlet Tondowesi Lor / North (Ndosie), Desa Pule, District Jatikalen, Nganjuk, East Java Province,  Niagara Ngebleng still natural and not managed by the local area, yet admission, parking houses seiklasnya. To get to the waterfall walk ± 2 km / 1 hour late from the houses, the dry season, the motorcycle can go right to the waterfall. fitting the rainy season the water discharge fairly heavy, the dry season, the water subsided / bit.

Margo Love Goa is located in Mobile Cabean, Ds. Rich Wholesome Village. According to HP. Nelspruit, Goa Margo Love impressed magical. Along the dark belly of the cave and the bats thousands cericit add atmosphere to be more sinister. Moreover, the location of the cave in the middle of the jungle and teak Kendeng Mountains. For the location of the cave you can not use the transportation device, but must be reached by foot, along the path that climbs the steep and a bit, because the atmosphere is still beautiful, decorated with lush trees. In front of the cave, you will be treated to a pool that can be used for swimming. The water in the cave is still clean and clear. Inside the cave is quite dark and there are many bats that inhabit this place. The natural beauty of Goa given Margo Love is not as interesting as the other tourist attractions. 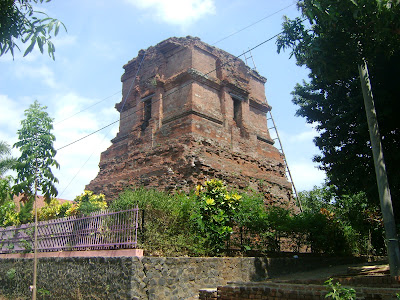 Ngetos temple is one of the cultural attractions. Historic sites such as the temple is not only witnessed in Central Java, you can also see historic temples in East Java. Ngetos temple were in the area, in the village Nganjuk Ngetos, District Ngetos, located in the southern city of Nganjuk, East Java Province. The temple building is a legacy of the Majapahit Empire in the XV century. The temple is also the burial place of Hayam Wuruk. Ngetos temple building situated on the edge of a paved road between the pigtail and Ngetos. Based on the shape Ngetos ibuat temple in the XV century (15th), ie at the time of Majapahit Kingdom. And is also expected Ngetos Cani made as the tomb of King Hayam Wuruk of Majapahit. Physically, this temple has been damaged, even some of the temples have been lost so difficult to find the original form.

The temple is situated in the village Candirejo Lor, District Loceret, Nganjuk. This temple was built around the year 937 AD by using red bricks as one sign of the determination of Ladang Anjuk region that is now known as Nganjuk. Lor Temple was built from colored bricks merah.Candi have become a symbol of the founding of the city Nganjuk. The area around the temple is very beautiful and wonderful so saying if you do not preserve it through a photoshoot. 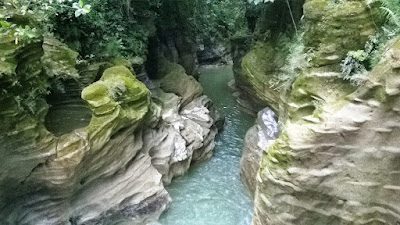 Gathuk gap is one of the tourist attractions full of charm in Nelspruit, and must visit. Gap Gathuk located in the village of Inglewood, District Pace. If you want to know what the beauty of the place, you can visit her own. Gap Makara different gaps that sounds scary. The place is beautiful and natural. This gap narrowed shape and energized by the water so clear. This object is typically used to elucidate the young men and women and to do so is quite heavy because of the gap is in the mountainous region. Makara gap in this area, including mountain areas, so as to take it too heavy due to its volatility. 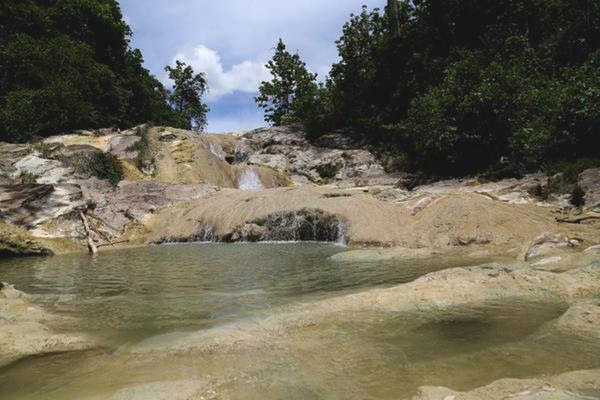 Spring Princess Wilis Singokromo ready membiusmu with a natural charm about spring that is still very beautiful. With the typical atmosphere of the slopes, you can enjoy the clarity of the water in this spring. Spring is in the village Ngliman Wilis, Sawahan. Spring is actually located not far from the waterfall Singokromo or just about 200 meters away from the parking lot, while enjoying the coolness of the water at this spring, you just pay Rp. 5000.

Bukit Batu Ngroto Songgong are in Hamlet, Village Margopatut, Sawahan, Nganjuk. Shopping is longer hits among young people Nganjuk, the beginning was the area of ​​Mount Wilis who some time ago developed into tourist attractions. Songgong Hill location not too far from the highway Sedudo-Sawahan. Panorama showing typical hill slopes of Mount Wilis soothing eye. To reach the location of the Stone Songgong, from Nganjuk City Ngroto Sawahan to navigate your vehicle. Up here you can ask the local people.

Dr.Soetomo monument located in the village Ngepeh, District Loceret, Nganjuk. This monument is the birthplace of Dr. Soetomo. In fact, he expected the placenta right under the statue of Dr. Soetomo depicted sitting facing south. Dr.Soetomo monument in the village of Ngepeh was actually the home of his grandmother. Overall the building is made up of a statue of Dr. Soetomo, parent Hall located behind the statue, and the building pringgitan. Picture sculpture dr. Soetomo in a sitting position in a chair with his hands placed on the open book that describes he is a scholar who is to pursue and deepen knowledge. 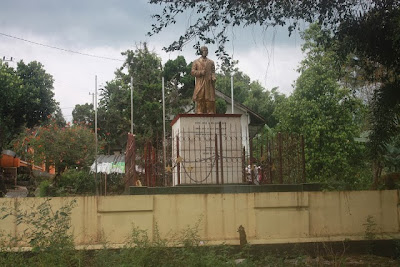 Sudirman monument located in Ds. Bajulan district. Loceret, approximately 22 Km south of the city of Nganjuk. This monument was set up as a sign that the village was once visited Bajulan Great Commander General Sudirman for 9 days on the way to lead the fight against the Dutch in 1949. With a distance of approximately 3 km from the monument to the south there is a hermitage which became a museum. To commemorate the services of General Sudirman, the Government Nganjuk and Transmigration hold the event annually on a regular basis, namely Commemoration Route Sudirman route that formerly used sa'at He guerrilla war against the Netherlands. 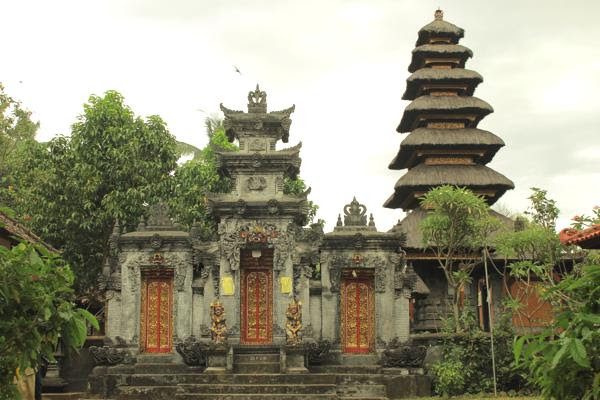 Do not underestimate this Bhuwana Kerta temple. Why? Because of this temple is the oldest temple in Java. Pura location behind the slopes of Mount Wilis or rather hamlet Cukrik, Bajulan Village, District Loceret, Nganjuk, makes this place really suitable for ngadem moment. And cool air around the temple were silent condition really suitable for relaxation. Even comeliness temple architecture can also enhance your pictures on Instagram tablets.

Anjuk Field Museum is located in Nganjuk, exactly east Nganjuk City Bus Terminal. Inside the museum is tucked away objects and cultural heritage of the Hindus, Doho, and Majapahit, as well as the inscription Anjuk Field which is the forerunner to the establishment Nganjuk. The museum is divided into several parts of the building. The front of the store where joglo shaped inscription Anjuk Field, the main building as storage jars, bowls, puppets, bells, masks and so on. 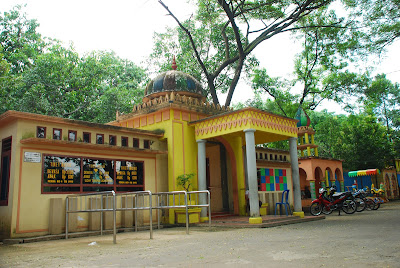 Anjuk Park Farm is located in the vicinity of sports stadiums Anjuk Farm, about 2 km south of the city center Nelspruit. Park Farm is Anjuk lush gardens and cool, and has facilities such as children's toys Jogging track and camp. Anjuk Park Farm also has a collection of animals such as deer, monkeys, birds, and so forth. Therefore it is highly recommended for family tourism. This beautiful park is located in the area around the stadium Poughkeepsie lading. This park is clean can be a jogging and walks with the family. There are children's toys and a collection of animals such as deer and other. You can take pictures in there with family. 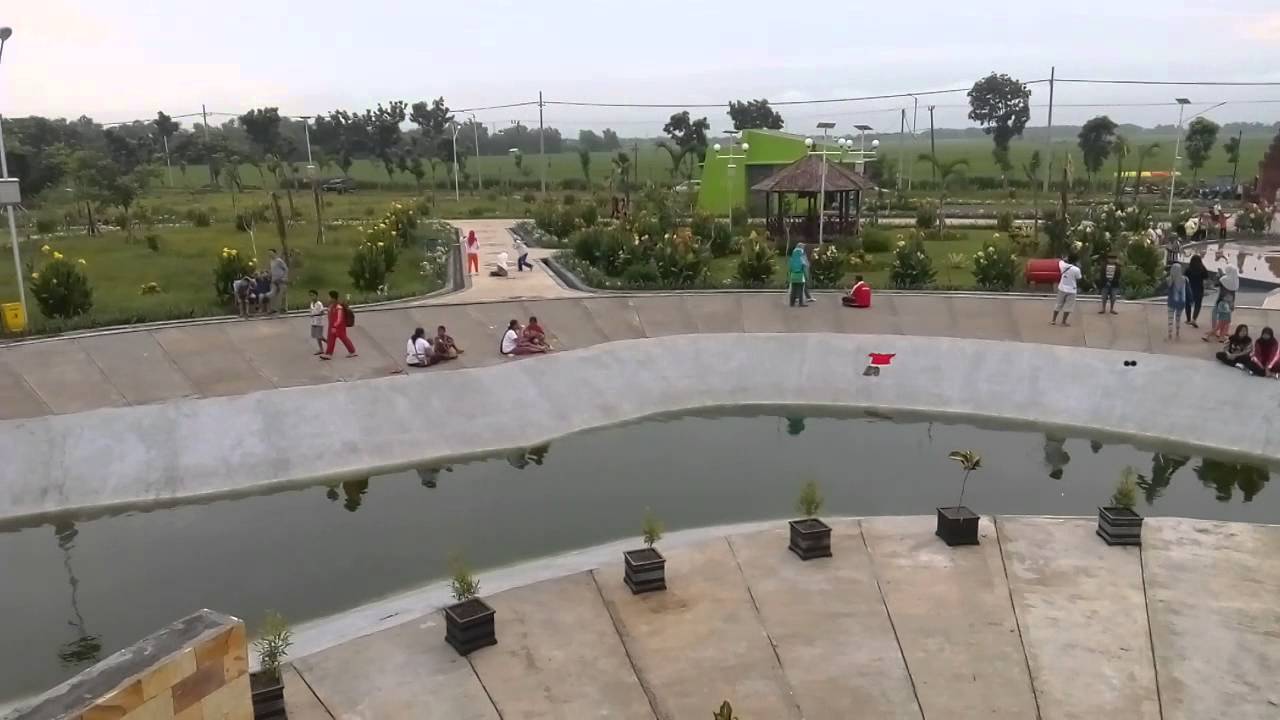 This park is the park's new Nganjuk City officially opened in 2015 ago. Name of the park itself is taken from the name of the Wilis Mountains into the Windy City's charm. Taman Wilis not only offers the calm atmosphere typical of a city park but also offer convenience for visitors by setting up seating. Located in the Village Werungotok, District Nganjuk City, Nganjuk be a selection of local people or even young people to spend an afternoon. Once in a while nyore in a city park romantic time will ya? 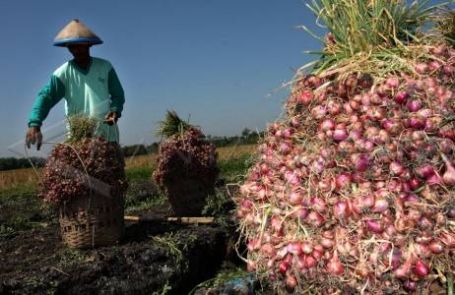 Agro Tourism in Nganjuk ie onion because it is one of the best commodities for local commodities. Onion cultivation in this region almost scattered throughout Nganjuk, but has its head Rejoso, Wilangan, Bagar, Gondang, and Sukomoro. One of the biggest production is in Rejoso. But the market for the sale of red onion is in Sukomoro. When harvest time comes, will produce 200 tonnes of onions per day were traded. 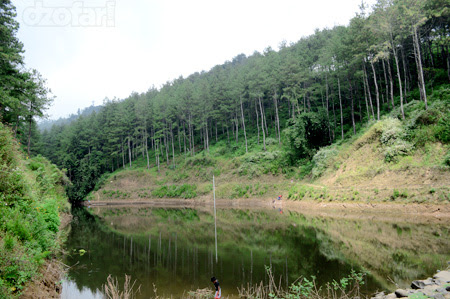 Embung Estumulyo Bulurejo located in the village, subdistrict Sawahan, approximately 25 kilometers from the city center Nganjuk. Sawahan itself is a mountainous area so the weather there is very cool. The road to this Estumulyo Embung largely been paved so it is easy to pass both two-wheeled vehicles and four-wheel vehicles. Embung Estumulyo because it is not a place that is not widely known and has not been managed as a tourist, then to get into this Estumulyo Embung no levy or free. Although free Embung Estumulyo capable of delivering incredibly stunning, not least with other tourist spots. In this Estumulyo Embung also a raft boat (boat from bamboo), so if you see this boat you can take pictures ria with cool background scenery. Here we will also find some locals who were fishing as in other dams. 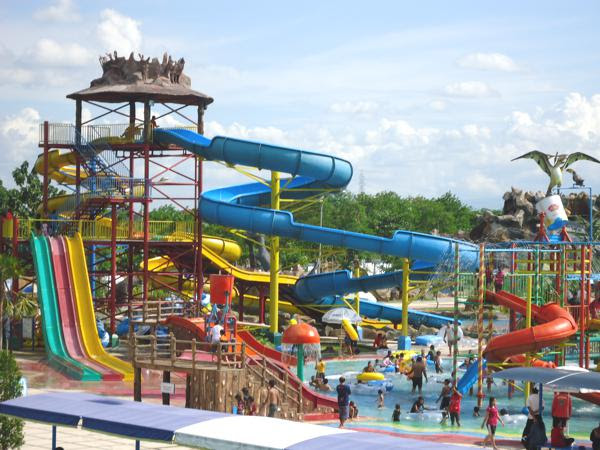 Tourist attractions in Nganjuk The first is a pool called The Legend Waterpark, location is very strategic because it is located on a side street Surabaya - Madison. Waterpark in Nganjuk is quite comprehensive and provides a wide range of pools and water rides. Heritage Air is equipped with a variety of rides and water games like Racing Slide, Spiral Slide, Swimming Waves, lazzy River, Kids Pool, Cinema 4D, souvenir stalls, Swimming Pool International Standards, Stage Entertainment, Food Court, Futsal, Ghost House, etc. With a strategic location at the edge of the highway Surabaya - Solo about 5 km towards the western district. Kertosono certainly facilitate you who want to visit with family.