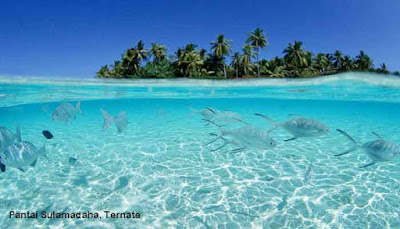 A deevaTravel - Ternate is a city of islands covering an area of 547 736 square kilometers located in North Maluku , Indonesia.

The topography of the city of Ternate with large parts of the mountainous and hilly, consisting of volcanic islands and atolls with the condition of soil types Rogusal (island of Ternate, Hiri Island, and Island Moti) and Rensika (Island Mayau, Island Tifure, Island Thus, Pulau Mano and Gurida Island).

But even so this area kept many tourist attractions that you must explore its beauty like Masjid Sultan Ternate with magnificent architecture, Fort Tolukko the shape of the building is very unique or explore the Sultanate of Ternate to know the history of Ternate city.

In addition to exploring the cultural attractions and historical Ternate , you can also enjoy the natural beauty of the beach Sulamadaha charming or feel the pleasure of the typical culinary Ternate.

Here are 10 Kein branches Ternate Exotic Nature that you should explore and enjoy. 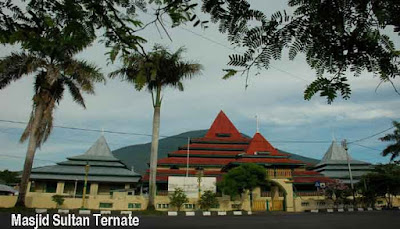 The mosque is located at Jalan Sultan Khairun, Soa Sio Village, District of North Ternate, Ternate, North Maluku Province is evidence of the existence of the first Islamic sultanate area of eastern Indonesia. Place called Masjid Sultan of Ternate was built in the 17th century when the reign of Sultan Saidi Barakati.

One tradition that every year is held at Masjid Sultan Ternate is hours Qunut that falls every night of the 16th of Ramadan. In this tradition, the Sultan and his relatives assisted by Bobato Hereafter (religious council of the kingdom) held a special ritual that is Kolano Uci Sabea , which means the fall of the Sultan to the mosque to pray and pray.

In a year, the ritual Kolano Sabean Uci carried out four times, including at night Qunut, Laylat al-Qadr (both in the month of Ramadan), and on Eid al-Fitr and Eid al-Adha. Uci Kolano implementation Sabean done for generations by the Sultan of Ternate until now. According to the belief, in any condition Kolano (Sultan) had to be done Sabean (salat) in Sigi Lamo (Sultan Mosque). Besides visiting the old mosque of the Sultanate of Ternate, tourists can also visit other historical attractions, such as Kedaton Sultanate of Ternate, Fort Orange, Kastela Fortress, Fortress Sentosa, as well as forts and other colonial relics. 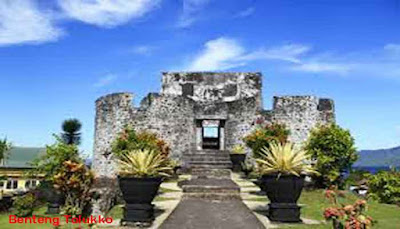 Fort Tolukko is Portuguese forts located in the Village Sangadji, District of North Ternate. The fortress was built by the Portuguese commander named Francisco Serao in 1540 AD It dibangundiatas Frozen rocks. Shaped fort three bastions, basements, inner courtyard, the hallway and the main building berbentukl this rectangle made ​​of a mixture of stone, rock, brick fragments held together by blends of lime and sand. 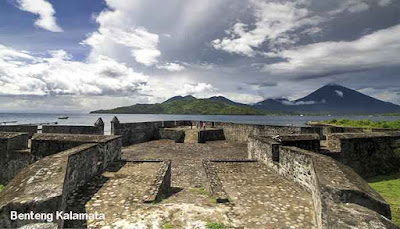 Kalamata Castle is a fortress built by the Portuguese in 1540 Fort Kalamata also called Fort Redwoods . Known as the Red Fort Wood is the village of the Redwoods, South Ternate City. The castle was originally named Santa Lucia, but was then known as Fort Kalamata. Kalamata itself is derived from the name of Pengeran Kalamata, the younger brother of the Sultan of Ternate Madarsyah.

Kalamata fort was first built by the Portuguese (Francisco Serao) in 1540 to face the Spanish attack of Rum, Tidore . Later, the castle was restored by the Governor General of the Dutch East Indies, Pieter Both, in 1609. Kalamata fort occupied by the Spanish in 1625 after Geen emptied Huigen Schapen (Portuguese). After being left for Spain, the fort was occupied by the Dutch. Later the fort was repaired by Major Lutzow in 1799. Fort Kalamata restored by the Government of Indonesia in 1994 and inaugurated in 1997 after pugarnya 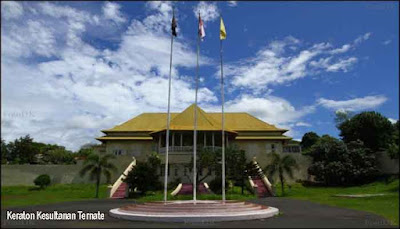 Ternate Sultanate is one of the historical sights of the city of Ternate, North Maluku province. Here you can find a variety of cultural and historical heritage of the Sultanate of Ternate. The octagonal palace built on 24 November 1813 AD by Sultan Muhammad Ali.

In the palace, you can find a wide collection of the Sultanate of Ternate ranging from objects of geology, archeology, ethnography, history, numismatics, philology, technology, art to ceramics. 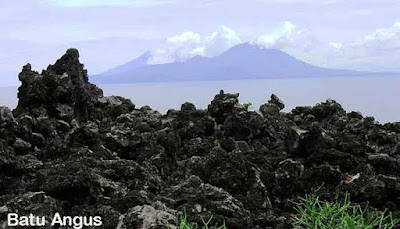 Angus Stone is a stretch of stone that looked charred that stretches dar i foot Gamalama up to the beach. Angus Stone These are remnants of lava from the eruption of Mount Gamalama in the 17th century ago.

Onggokkan rocks stalagmites resemble this unique look combined with green Gamalama . Not to mention the blue expanse of ocean nan become increasingly beautify background panorama around Batu Angus. Angus rocks stretches from the foot of Mount Gamalama up to the beach / sea. Another highway crosses this cluster of rocks. So if you just want to see Angus Stone simply stop at the roadside and take photos free of charge.

For those of you who pass the highway that leads to the area Gamalama will witness the beautiful nature paintings of the court comprehensive collection Angus Stone. Therefore, many tourists who deliberately stop the vehicle and stopped for a moment while enjoying the fresh air in the Batu Angus. 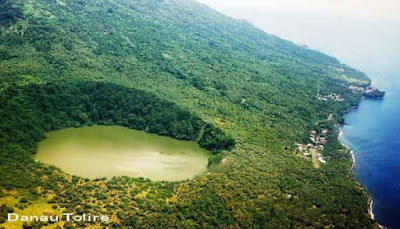 Tolire is a lake located in Ternate, North Maluku. The lake is located about 10 km from the center of the city of Ternate, in addition to the unique shape also has an interesting legend. Tolire is under the foot of Mount Gamalama, the highest volcano in North Maluku. The lake itself is composed of two pieces. Local people call Tolire Tolire Large and Small. The distance between them is only about 200 meters.

Of those lakes, Tolire Large has its own uniqueness. This lake resembles a giant pan. From the upper edge to the surface of the lake water with a depth of about 50 meters and an area of ​​about 5 hectares. While the depth of the lake itself until now unknown.

Another uniqueness of this lake is that if you throw something into the lake, however the strength of the throw by using a stone or other object, for example, will never touch the water of the lake. Yet when the throw from the upper edge of the lake, the lake looks to be under foot thrower. Perhaps those who first came to the lake, would not believe that fact. 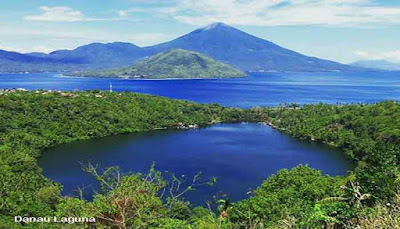 In Laguna lake, you will be pampered with a panoramic expanse of the lake surrounded by green hills, blue sea and mountain sturdiness. Laguna Lake has quiet waters used by local people for cultivation of freshwater fish and take water for watering the garden. In addition, this beautiful lake is also used as a location for fishing and swimming spots travel for tourists. 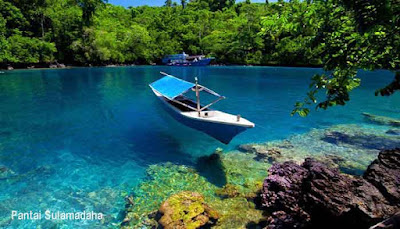 Sulamadaha Beach or Glass Beach is an exotic beach is so natural in Ternate, North Maluku province.

With sea water is very clear as glass, at this beach you can do beach activities such as swimming, diving or snoorkeling with considerable visibility. Turkish Sulamadaha also offers the beauty of the natural feel able to eliminate the fatigue everyone who came to visit. Sand, waves, ocean blue nan glass-clear and extremely charming coastal scenery makes Turkish Sulamadaha as a place that you must visit. 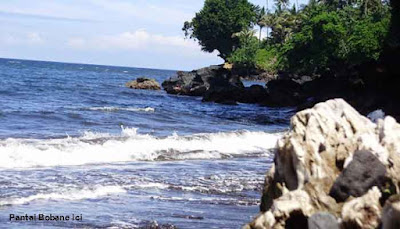 One of the other beach tourism that is not less amazing is this Ici Bobane beach.  The beach Bobane Ici is located in the village area Aftador. The beach is located at a distance of 21 km from the southern city of Ternate.

In addition to its beautiful beaches, crystal clear sea water and beautiful scenery that surrounds the shoreline. You will also be presented with the music naturally derived from singing the song of pebble beaches of the waves crashing on the beach bibiran. 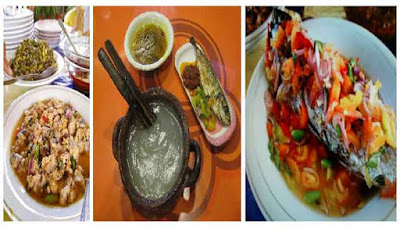 Besides exploring the natural beauty of Ternate very charming, it feels incomplete if you do not taste Culinary Ternate very tempting. In Ternate, you can enjoy the delights Papeda. Papeda an exotic and unique food so start looking for the culinary adventurer.> Papeda is a typical food such as sago Maluku and Papua, which is usually served with tuna or mubara spiced with turmeric. Papeda white colored and textured to resemble sticky glue with fresh flavors. Papeda is a food rich in fiber, low in cholesterol and quite bernutrisiini will arouse your taste buds while accompanied by fish Snapper Yellow Kuah at dusk or Gohu fish or sashimi Ternate is mainly made ​​from Raw Tuna Fish.

In addition you can also enjoy Ikan Bakar Dabu-Dabu Raw , Menu this one is very, tempting because the menu is the basic material is fresh fish is tuna, fresh fish baked in the embers of a coconut shell, to appear yellow or brownish at sides and then poured with with Dabu-Dabu crude, which is made ​​from onion, tomato, and chili typical eclectus and also do not forget the leaves kemangginya. Well this is very suitable for fish eaten with rice.

Well for those of you who want Exploring Natural Beauty Ternate conn il learn the history of the town of Ternate and Enjoy Culinary Travel Ternate please plan your holiday this year's visit to Ternate, North Maluku province.